Newsletter
Newsletter
Thank you for signing up with us.
You are browsing Japan Rail, Global Passes, JR East-South Hokkaido Rail Pass
Consecutive
Child (under the age of 11)
Unlimited use of trains operated by JR East in the Kanto (Tokyo, Kanagawa, Chiba, Saitama, Gunma, Tochigi and Ibaraki Prefectures) and Tohoku (Fukushima, Miyagi, Yamagata, Akita, Iwate and Aomori Prefectures) regions and JR Hokkaido trains in southern Hokkaido (as far as Sapporo). The pass is also valid on the Tokyo Monorail which connects central Tokyo with Haneda Airport.

In the designated area, you can use all types of JR East and JR Hokkaido trains, including shinkansen (except Tokaido Shinkansen, which is operated by JR Central), limited express trains and local trains (except some "liner" trains). The BRT buses along the Sanriku Coast are also covered.

There are a small number of JR trains, which partially run on the tracks of different railway companies. When riding along a non-JR owned section, pass holders will have to pay the fare for the non-JR section on board of the train or at the station. Only the following non-JR train lines can also be used with the JR East South Hokkaido Rail Pass: Seat reservations can be made for free. Only foreign visitors to Japan (with temporary visitor status) can use the JR East South Hokkaido Rail Pass. It cannot be used by residents of Japan. 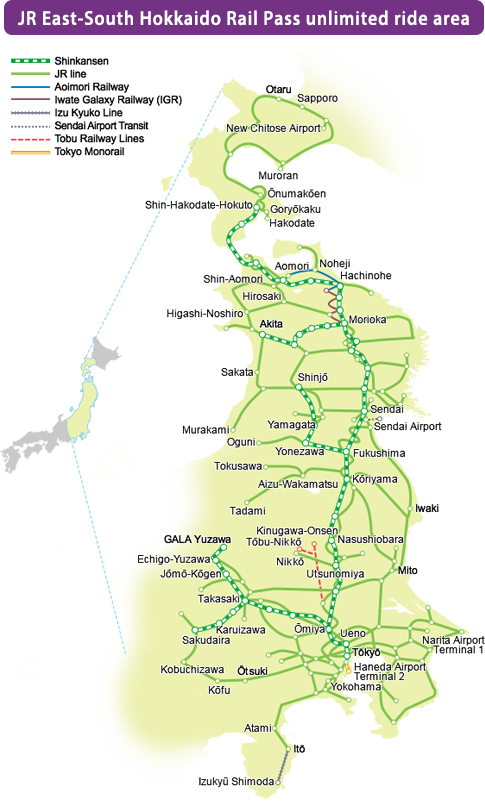 Thank you for your purchase of rail passes. We will get back to you within the next 3 working days.
« View more rail passes

Number of child travel for free: